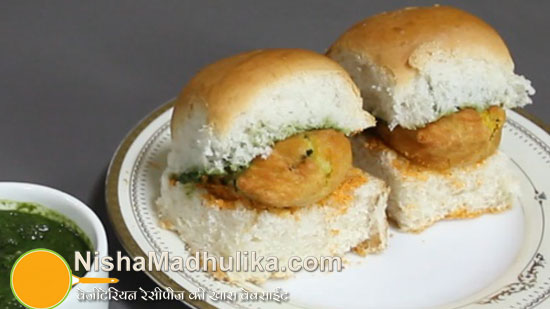 Mumbai's favorite and most popular street food, Vada Pav has become everyone's favorite. Vada pav layered with chutney and batata vada inside is really tasty and spicy to eat. You can very easily prepare this at your home as a special breakfast.

How to make Mumbai Vad Pav

Take chickpea flour in a big mixing bowl and start adding water to it in small portions to prepare a batter dense in consistency. To it then add red chilly powder, salt, turmeric powder and baking soda. Stir the batter using a spoon for 3 to 4 minutes until it gets fluffy. The consistency of batter should be same as required for making pakoras. More than half cup of water is used for making this much quantity of water.

Peel the potatoes and crumble them coarsely. 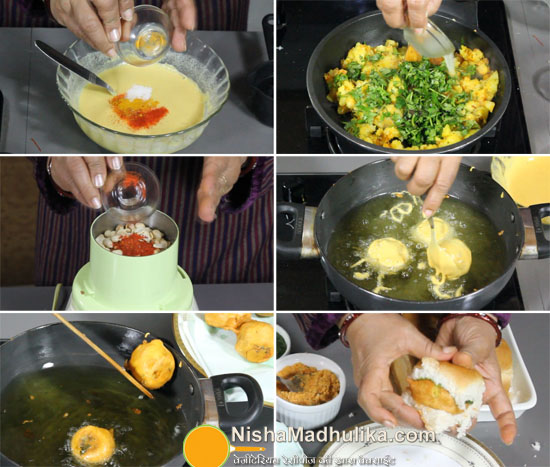 Now heat 1 tbsp oil in a pan. When the oil is sufficiently hot, splutter red mustard seeds first. After this add cumin seeds and asafoetida to it. When the seeds crackle add green chilly, ginger paste and curry leaves. Saute for a while and then add turmeric powder, mashed potatoes, salt, red chilly powder and mix everything really well.

Turn off the flame and mix some green coriander and lemon into the potatoes thoroughly. Potatoes for making bonda are ready. Transfer the stuffing to a bowl.

For making chutney, splutter some cumin seeds in a pan. Keep the flame low. When the seeds crackle add asafoetida and peanuts to it. Saute for a while and then turn off the flame.

Heat enough oil in a wok. Break small lump from the potato mixer and roll giving it a round shape. Place these balls on the plate. After preparing all the balls, take one ball and dip it in to the gram flour batter. Then drop into the oil for frying.

Place as many balls as possible in the wok. Drain out the balls once they turn golden brown in color and place them on a plate covered with absorbent paper. Likewise fry rest of the balls as well.

Now take a pav and slit it from the center keeping it joined at one end. Spread some peanut chutney on the one side and green coriander chutney on the other side. Place the potato pakora inside and press down gently. Vada Pav is ready. Similarly prepare rest of the vada pav as well.