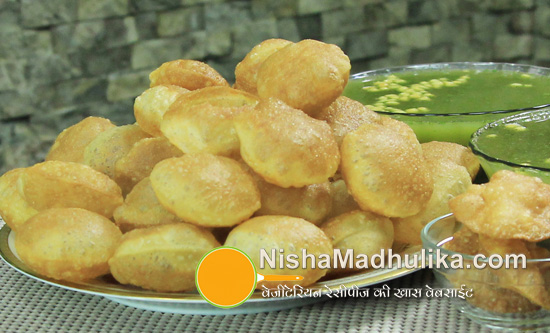 We all drool when see tangy-masala water and golgappas stuffed with boiled potatoes-peas. These tempting gol gappas are prepared with semolina and wheat flour as well. Gol gappas prepared with wheat flour are light in weight as compared to sooji gol gappas. It is not at all difficult to make these puffed and crispy gol gappas. Why don’t you try it yourself?

For making atta gol gappas, knead the dough first. For this take flour in a bowl and mix semolina into it. Now ad water in small parts and knead stiff and tight dough.

Cover the dough with a wet cloth and keep aside for 30 minutes. After 30 minutes, remove the cloth and grease your hands with some to knead the dough again until smooth. Keep kneading for up to 4 to 5 minutes to make it really smooth.

Dough for making gol gappas is now ready, divide it into small portions. Grease your hands with some oil and roll the lumps into flat dough balls. Cover these dough balls. 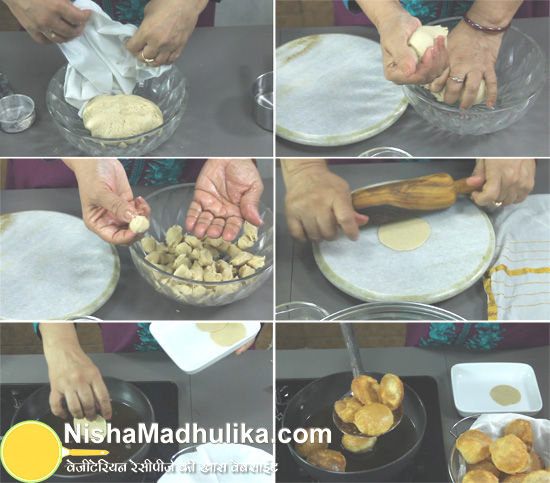 Keep the gol gappas covered for 15 to 20 minutes and then fry them.

Heat enough oil in a wok. When the oil is heated well, place as many pooris as possible and press them gently with ladle to puff them up. Fry until the gol gappas turn golden brown and crispy. Drain out the fried gol gappas in a sieve kept above the plate. Likewise prepare all the gol gappas. The excess oil drain out in the plate kept below the sieve.

When the gol gappas cool down, stuffed them with potato stuffing and serve them with tempting sweet-sour water.