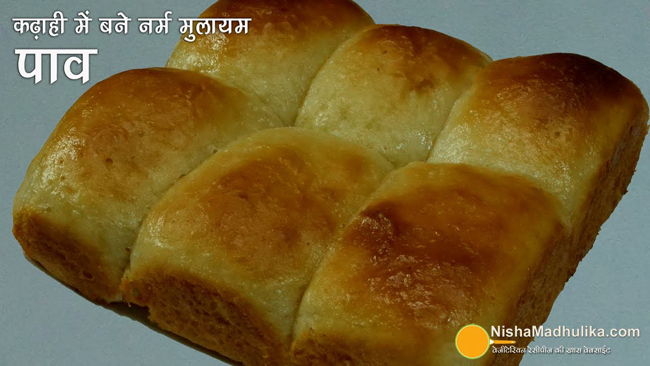 Everyone knows that Pav bread is baked in the oven, but does anyone know that you can bake it in Kadai as well. Today, we are going to bake Pav in Kadai, which will turn out better than the store-brought Pav.

Ingredients for Ladi Pav in Kadai:

In a bowl, add 1.5 tsp of instant active yeast, 1.5 tsp of sugar, and 2-3 tbsp of milk, and mix well. Cover the mixture and set aside for 6-7 minutes. After 7 minutes, the mixture will become foamy.

Take 1.5 cups of maida in a bowl. Add ⅓ tsp of salt to the maida and mix well. Now, add the fermented mixture to the maida. With the help of lukewarm milk, knead a soft dough.

Once the dough is ready, add 1.5 tbsp of olive oil and knead the dough for 8-10 minutes. Once the dough becomes smooth, apply a little oil, cover, and keep it at a warm place.

Alternative: You can use any refined oil instead of olive oil.

The dough has puffed up well. Apply a little dry maida on your hand and punch the dough lightly. Take the dough out on a board and roll it into a log. Cut the rolled log from the center into 2-halves. Further, cut each half into 3-portions.

In total, we have 6-pieces of the dough. Grease a container with a little oil to bake the Pav.

Pick a portion of the dough, fold and roll it into a ball. Place all the prepared balls in the greased container. Cover all balls in the tray and rest for 40 minutes.

The balls have puffed up. In a bowl, add 1 tbsp of cream, 1 tbsp of milk, and mix well. Apply the cream over the dough balls. The cream will make the Pav shiny.

To bake the Pav in Kadai, add 2 cups of salt in it and level it. Place a steamer rack. Cover and preheat the Kadai for 10 minutes over high heat.

Put the pav container over the streamer rack. Cover the Kadai and bake the pavs over medium-high heat. Check the Pav after 20 minutes.

The Pav has slightly turned brown from some area, but it is not fully-baked. Immediately, cover the Kadai and bake the pav for another 10 minutes over medium-high heat.

The Pav has turned perfectly brown. Take the tray out from the Kadai and brush the top of the pav with butter. Cover the Pav tray with a slightly wet cloth for 10 minutes.

Slide a knife along the edges and ease out the pav from the container. Ladi Pav is ready to be served. They turned out very soft and spongy.

Serve the pav with baji or any side dish and enjoy them with your family.