try crispy pakoras and cutlets of Arabi for the Navratri fast. Arabic cutlets and dumpling is very tasty and easy to make. try it with the green chutney it is very tasty with it.

How to make Colocasia pakora.

To make Colocasia (Arabi) pakoras, take 6 cups of buckwheat flour and add a little water to it, make a smooth batter like pakoras. Once the mixture is ready, keep it for some time

Now heat the oil in a pan to fry the pakoras. Once the oil is hot, add a little bit batter of pakoras to it and check the temperature of the oil. We need medium-fast hot oil for frying the pakoras. 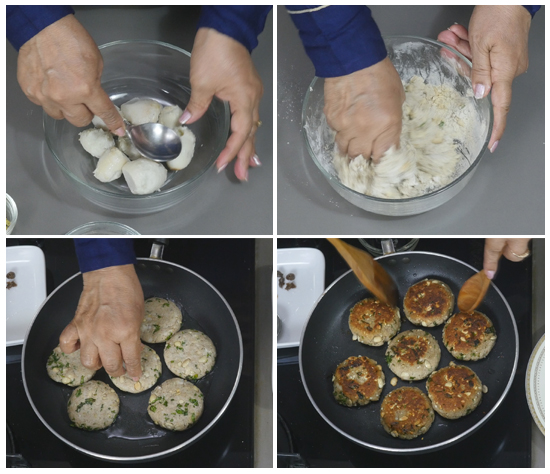 How to make cutlets of Colocasia (Arabi)

After mixing all the things, add ½ cup ground peanut powder and 1-2 tablespoons green coriander and mix well by hand and prepare the dough. Now apply a little oil on your hands and take a little mixture. Now flatten it round and shape the cutlet. In this way make all the cutlets of the doe.

After 3 minutes, flip the cutlet and roast it from the other side till it turns golden brown. Turn the cutlet and put 1-2 tablespoons of oil in it and cover it and let it roast for 2-3 minutes.

After 3 minutes, lightly heat the pan and turn the cutlet over and roast it till the golden turns brown.

Once the cutlets turn golden brown on both sides, take them on a plate. It takes 12 minutes to cook one-time cutlets. Crispy pakora and cutlets of Colocasia (Arabi) are ready for fasting. Serve it with a fast green chutney and it is very tasty for the fruit.