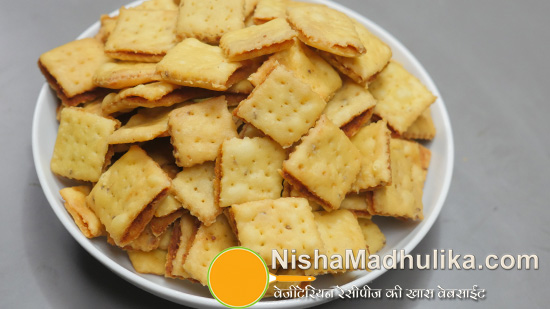 Ingredients for the sandwich of bakharwadi

How to make the bhakarwadi sandwich:

Take 2 cups of the refined flour in a bowl and add ½ tsp of salt, ¼ tsp of crushed carom seeds,  ¼ cup of oil. Mix all the ingredients and add water less than the ½ cup in small portions to knead the stiff dough. Cover and keep it aside for the 15-20 minutes to set.

For the masala mixture 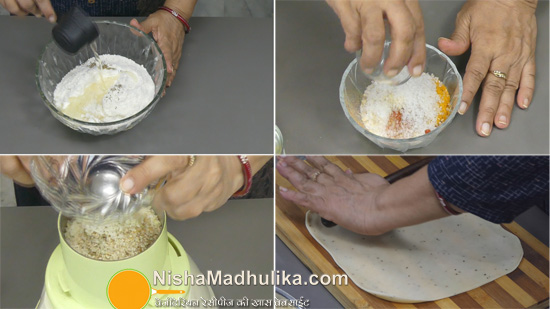 Knead the dough again after the 20 minutes by applying some oil on your palms to make it soft. Divide the dough into four equal halves and take one part of the dough, cover the rest. Roll that one portion of dough between your palms and make a round ball out of it. Press it and flatten it to 9-10 inches using the rolling pin. Flatten it from the edges and perform the same technique of flattening on another portion of the dough.

Spread the tamarind chutney and 2 tbsp of the masala mixture on it evenly. Cover the stuffing using the first flatten dough and again roll the rolling pin over it.

Cut 1-1.25 inches of the square from the stuffed dough and poke it using the fork from both the sides so the bhakarwadi won’t expand. Separate the pieces individually. Practice the same technique on the other portion of the dough. Keep aside the separated bhakarwadi pieces in the open air to set for the 1 hour.

To fry the bhakarwadi

Preheat the oil after 1 hour and check the temperature of the oil by putting one bhakarwadi in it. 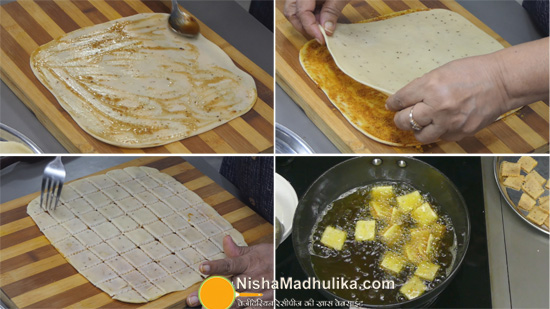 Remove and keep them on the plate to cool down. Store them in an airtight container and consume these for the 3 months.

1-  You can also mix the chickpea flour in the refined flour while preparing the dough.