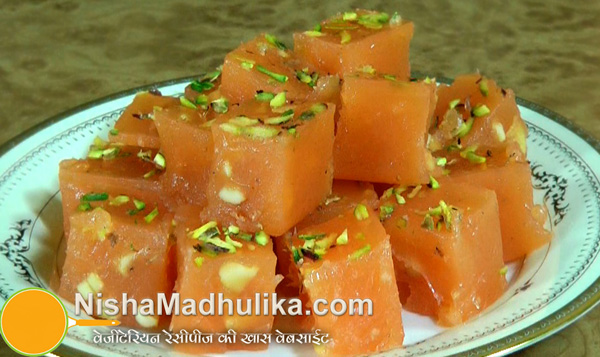 Karachi halwa or Bombay halwa is a unique Sindhi halwa as compared to rest of the halwa’s.  It appears to have rubber like texture hence also called as rubber halwa. You will surely like Karachi halwa which is a blend of desi ghee and dry mawa and appears sparkling. Make Karachi halwa with patience and you will find it easy in making.

How to make Bombay karachi Halwa

For making halwa use 2 cup .i.e. 400 grams water. Firstly add little water at a time in corn flour and mix until all lumps get dissolved. Mix at least 1- ½ cup water in the mixture. Take sugar in a pan and add ¾ cup water in sugar. cook syrup until sugar gets melted properly

Mix corn flour mixture in sugar syrup and on low flame cook halwa by stirring constantly. It takes 10-12 minutes for halwa to start becoming thick. Cook on low flame only. It starts becoming transparent, now add ghee in halwa and cook until it mixes well. Add rest of the ghee as well and stir until all ghee is absorbed in halwa. 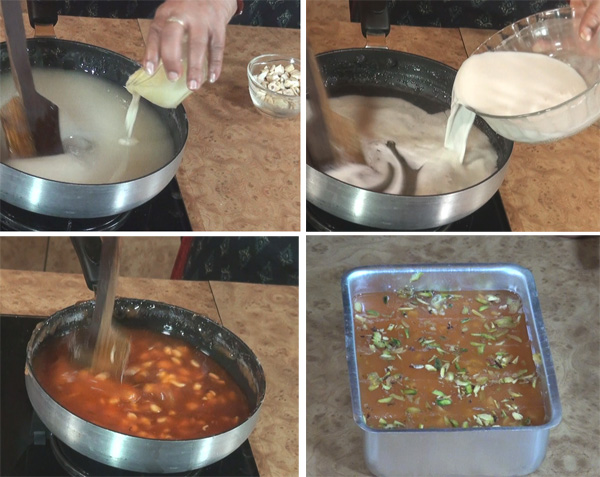 Halwa has become glittery, add color into it and cook until it mixes completely. Add cashew nuts and cardamom powder and cook nicely. Cook for 5-7 minutes more or until it gets thick consistency.

Karachi halwa is ready. Take out halwa in any plate and keep it for freezing. Sprinkle thinly sliced pistachios and press them with spoon. Cut into any size or shape as per your desire after it gets freeze.

Enjoy eating the halwa and store rest of the halwa in any air tight container. Do not store it in refrigerator.

Less cooked halwa is not much tasty and doesn’t have rubber texture.

Don’t cook Karachi halwa on high flame it may become tough or hard like a stone.