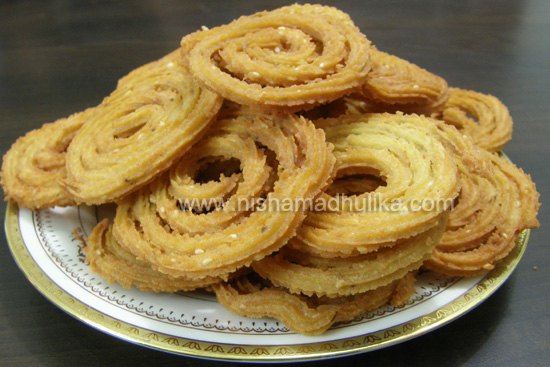 Chakali is a traditional recipe made during festivals in Maharashtra and South India. It is very tasty and crispy recipe and can be made in various different styles by adding different ingredients to it. Like,

Chakali or Murukku can be made by various different methods. Some of them are :

You can prepare rice chakali with any ingredients that is available in your kitchen. Like i had urad dal flour, moong dal flour and gram flour available in my kitchen, so i have used the third method to make Rice Chakali. Lets start with our preparation now.

Method - How to make Rice Chakali

Mix and sieve all the flours (rice flour, urad dal flour, moong dal flour, gram flour) in one bowl. Add all the spices and oil to it and mix well with hands. Now knead the mixture with little water to make a smooth dough. Leave the dough covered for 20 minutes. Dough to make chakali is ready.

Take a portion of dough (atleast 1/2 cup) and roll it into a long roll. Now put this roll into the machine and close it. Spread a polythene sheet on the shelf or the kitchen top and press the machine from the top revolving it in circular motion so that the mixture falls on the sheet making a chakali. Prepare 4-5 chakali on the polythene sheet.

heat oil in a pan. Pick the chakali from the sheet in a way that it does not break or lose its shape. Put them in the pan and fry on a low or medium flame. Fry 5-6 chakalis at one time until they turn brown and crispy. Take them out on a plate and prepare more chakalis with the remaining dough in the same manner.

Rice Chakali is ready. Serve them instant or store in an air-tight container to consume it later on at tea time. These can be consumed for over 2 months.

Do not over use the oil while kneading the dough, else the flour will fall apart and it will be difficult to knead it.

Do not fry the chakali on high flame, else it will turn brown from the upper surface instantly leaving the inner surface raw and soft.