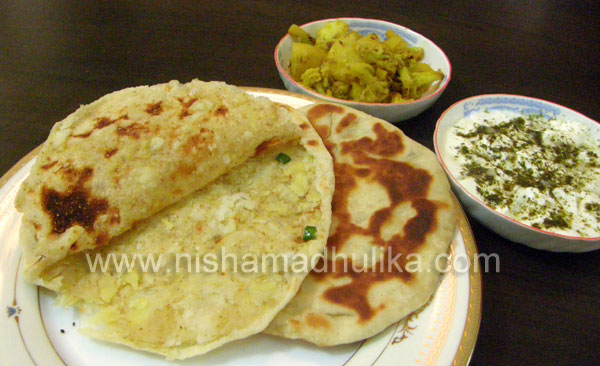 Plain Naan is obviously delicious but Stuffed Naan is more tasty, there are different types of Stuffed Naan : Potato, Paneer, Dal , Cauliflower etc. All Stuffed Naan's are made in this same manner.

Today we will prepare Stuffed Potato Naan/Aloo Naan, so let us start the preparation.

- How to make Potato Stuffed Naan

Filter flour mixed with baking soda and salt. Create a small crater in the flour then pour curd, milk and oil in it. Mix all these ingredients properly and use some water enough to knead a soft dough. Press the dough nicely with your hand making it smooth, it becomes very light. Cover the dough and keep aside for 4 hours allowing it to ferment only then dough will be ready to make Naan.

Wash then boil potatoes, cool them, peel and break the potatoes into small pieces. Wash green chilly, breaks its stem/stems then finely chop it. Peel, wash then grate ginger.

Take a ball of dough, wrap it in dry flour and flatten with a rolling pin into a Naan 5-6 inches in diameter. Place a portion of potato stuffing on the rolled Naan, wrap up the Naan and close all open ends. Wrap this potato stuffed ball in dry flour and expand a little with your fingers. Gently roll with a rolling pin into a round Naan 6-7 inches in diameter..

Grease Tandoor(furnace) tray with oil and heat. Place the rolled Naan on the hot tray and pour some oil on top of it. Turn the Naan over and cook till it turns brown. While cooking the Naan you can also switch off the Tandoor switch time to time to cool it, while making sure the Naan does not burn. Similarly prepare all Naan's.