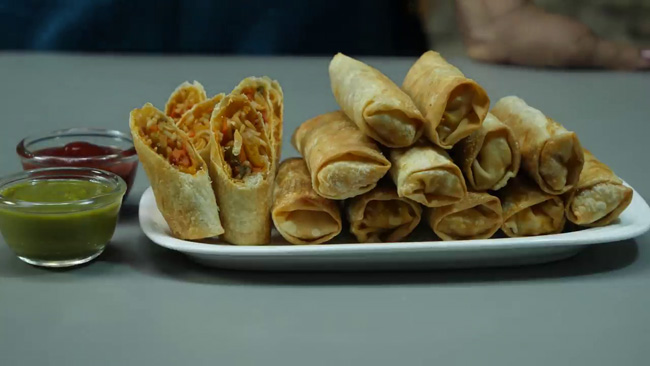 In a bowl add 1 cup of all purpose flour, ¼ tsp of salt and 1 tbsp of oil and mix it.  Then add water little by little and knead a soft dough.  After kneading, cover it and keep it for 20 minutes.

Put water in the pan and cover it and boil it.  When it comes to boil, add 1 tsp of oil and ½ tsp of salt and mix it well.  Then put noodles in it and let it boil for 8 minutes.  After the time is up, turn off the flame and filter them and pour cold water on them and cool them while turning them well.  Then add some oil and mix it well and keep it covered.

Put 1 tsp of oil in a pan and heat it.  Put 1 tsp of grated ginger and 2 finely chopped green chilies in hot oil and fry lightly.  Then add ½ cup of thinly sliced ​​carrot and ½ tsp of salt and fry it lightly, remember that the flame will remain high.

After frying for half a minute, add ½ cup of chopped green capsicum and ½ cup of lengthwise chopped yellow capsicum and fry it lightly.  Then add ½ tsp of coarsely ground black pepper, ½ tsp of red chilli powder, ½ tsp of soy sauce, ½ tsp of vinegar and 1 tsp of tomato sauce.

Fry them lightly while mixing, then add ¾ cup of noodles to it and mix it well.  In this way the stuffing will be ready, take it out and cool it.

Process of making the Wrapper

Mash the dough lightly and break it into small balls.  Take a ball and make it round like a peda.  Then roll it lightly into a diameter of 3-3.5 inches and keep it on a plate.  Make a peda by making two more balls and roll them in the same way and keep them on a plate.

Now spread some dry flour on both sides by sprinkling it.  Roll it in a diameter of 6-7 inches, remember that you have to roll it by turning once too or else the whole bottom will remain small.  Heat the tawa lightly, keep it on the tawa and cook it on the flame a little from both the sides.  Then turn off the flame and take it off.

Now separate the three rotis from where they are separating and keep them in a plate.  Prepare the rest in the same way.

Process of assembling the Rolls

To stick the spring rolls, make a thick batter by adding 2 tbsp of all purpose flour and some water in a bowl.  Place a wrapper on the board and place the stuffing on one corner, such that there is a space of 1-1 inches on all three sides.  Now fold the bottom and cover the stuffing.  Then close it from both the corners as well.  Stick both of them by applying slurry on the top side.  Then fold it and close it by sticking it by applying slurry on the corner.  In this way the roll will be assembled, fill the rest in the same way and prepare it by rolling.

Process of baking the Spring Rolls

When the time is up, take them out and put them back in the oven and bake for 10 minutes.  After 10 minutes spring rolls will be ready, let them cool down a bit.  When cool, serve them with any dip of your choice and enjoy their taste.

The dough has to be kneaded soft.

While filling the spring rolls, the stuffing has to be closed properly.

There is a difference of time in different ovens.  So first bake them for 20 minutes at 200 degree centigrade, then increase the time and bake them till they become golden brown.