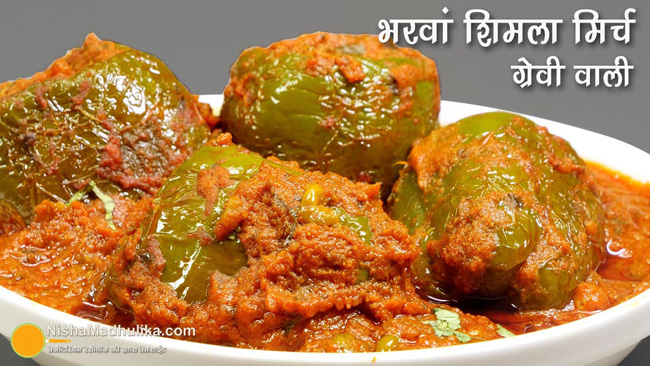 Add 1 tsp of coriander powder, ½ tsp of turmeric, 1 tsp of grated ginger and 2 finely chopped green chillies to the cooked peas and mix them well.  Then add mashed 3 boiled potatoes to it, then add ¾ tsp of salt, ½ tsp of red chilli, ½ tsp of amchur powder and ½ tsp of garam masala.  Now roast the potatoes with all these spices for 3 minutes on medium flame and mash them well.  When the time is up, the stuffing will be ready.  Mix some green coriander on it and take it out and cool it.

Wash 4 capsicums (300 grams) and cut their stalks from the middle.  Remember, while cutting them, remove the seeds in between them and empty them completely, cut them like this.  Put 2-3 tbsp of oil in a pan and heat it.  Put capsicum in hot oil and fry it while rotating on medium flame.  Cook them by covering them and after every 2 minutes, open them and turn them back, cover them and fry them well from all sides.  After it turns brown all around, do it for 1-1 minutes from front and back also.  In this way the capsicum will be ready after roasting, take them out and cool them.

Heat the remaining oil in the pan in which the capsicum was fried, on a low flame.  Put ½ tsp of cumin, 1 pinch of asafoetida, 1 tsp of coriander powder, ½ tsp of turmeric and tomato-green chilli-ginger paste (2 tomatoes, 2 green chillies and 1 inch ginger) in hot oil.  Now intensify the flame, add 1 tsp of kashmiri red chili to the spices and fry while stirring.  When lightly roasted, add 1 tbsp of dry fenugreek (crush and put it in) in the spices.  Now stir fry for a while till the spices leave the oil.

While the masala is roasted, stuff the capsicum in it.  Put stuffing in a capsicum with the help of a spoon.  Press by pressing and fill as much stuffing as can come inside it.  Prepare all capsicums in the same way by filling them.  Meanwhile, keep stirring the spices too.

After the spices are roasted, add ¾ cup of water, ¾ tsp of salt and ½ tsp of garam masala and mix it well.  Now cook it till it boils, then add some green coriander and mix it.  Gravy will be ready.  Put the stuffed capsicum in it, cover it and cook on low flame for 2 minutes.  When the time is up, coat the capsicum well in the gravy and cook it for 4-5 minutes after rotating it.

After the time is up, turn off the flame and take it out.  In this way juicy stuffed capsicum will be ready.  Garnish it with some green coriander and enjoy its taste.

While frying capsicum in oil, keep rotating it for a while so that it gets cooked evenly from all sides.

After the gravy is made, put the stuffed capsicum in the gravy and cook for 6-7 minutes.