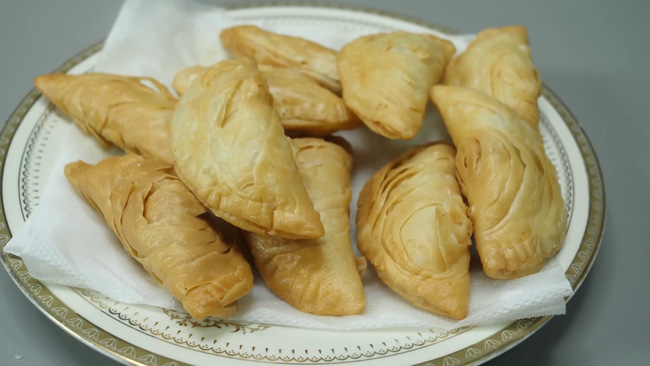 Gujiya is also served in sweets during the festival.  But there is a lack of love in the Gujiya bought from outside.  That's why today we are going to make gujiya with a crispy layer of mawa.  It is very easy to make and the ingredients to make it are present in your kitchen.  So you too make gujiyas with this method and give love and a sweet taste to your family members and guests.

In a bowl, add 1 cup(150 grams) of all purpose flour and 1 tbsp of ghee and mix it well.  Then add water little by little and knead it well.  After kneading, cover it and keep it for half an hour.

Take it out in a bowl and let it cool down.  Put 2 tbsp of semolina and 1 tsp of ghee in the pan and fry till the semolina changes color.  After roasting, put it in the same bowl.  Then put ½ cup of sugar powder and 6 small coarsely crushed cardamoms in this bowl.  Mix everything well, the stuffing will be ready.

Put 1.5 tbsp of ghee and 2 tbsp of cornflour in the bowl and mix it well, sata will be ready.  Mash the dough a little and make 4 pieces of it, then round them like a peda, cover them and keep them.  Now take a ball and roll it a little thick and keep it in a plate, roll and keep the rest of the rolls in the same way.

Then with the help of a knife, first cut this roll in half, then cut small balls of both the parts.  Take a ball and roll it diagonally forward by pressing it.  Remember, it has to be slightly thick like roti.  Put some stuffing on it by rolling it, then put the stuffing in the middle and apply water around it with your finger.  Now fold it and close it tightly.  Then make a design by pressing it with a forked spoon from where it is pasted.  Similarly prepare all the gujiyas by filling them.

Put ghee in a pan and heat it, remember that the ghee should be less hot and the flame should also be low.  Put as many gujiyas as you can in hot ghee and fry them on low-medium flame.  When they float up, fry them from both the sides till they turn golden brown.  After frying, take them out and fry the rest in the same way.  In this way gujiyas will be ready, serve them and enjoy their taste.

Knead the dough a little hard.

The layer of sata should be thin.

They have to be rolled well so that there is no space left inside.

The stuffing is not to be filled too much and water has to be applied well on the corners.

While frying the gujiyas, the ghee should be slightly hot and the flame should be low-medium.