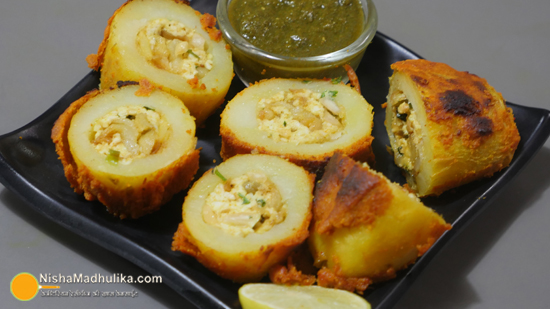 It is a recipe which is made up of a special spice which is consist of 10 roasted spices. It is perfect for serving on any occasion.

How to make Stuffed Tandoori Potato

Take 4 potatoes, peel and wash them. After peeling them, scoop them using a scooper to hollow them. After hollowing them, dip them back into the water and wash them well. After washing them, place them in a manner that the excess amount of water moves out from them. Later on, wash the remaining of potatoes and place them on a towel to dry.

Take some oil in a wok and preheat it. The rightly heated oil is required to fry the potatoes. Add them for frying to the heated oil on medium to high flame and after a while turn the flame to low. Fry potatoes until they become golden brown from all the sides. After frying them, drain them out of the wok using a ladle.  Place them aside and fry the remains of potatoes likewise.

Take a pan, 2 teaspoons of oil in it and preheat it. Add a 1/2 inch of the finely chopped ginger baton, 2 finely chopped green chillies to it on medium flame. Saute them for a while and add 2 tablespoons of finely chopped cashews to it followed by a tablespoon of raisins. Saute all the ingredients to make them crunchy.

Remove them in a separate bowl and add a cup of grated cottage cheese to it.  Add a ½ quantity of potato cuttings, a ½ teaspoon of salt, a 1/2 teaspoon of Chaat Masala and a packet of Masala Ae-Magic to it. Mix all the ingredients well and while mixing make sure that you mash all the potato cutting well.

Add a teaspoon of green coriander to it and mix well. Stuff the stuffing inside the fried potatoes using a spoon. 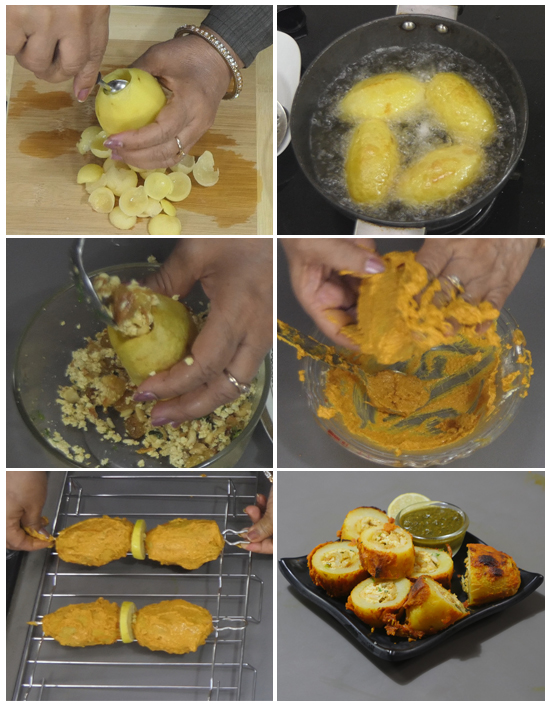 Spread marinade over the potatoes evenly and keep them aside for 10 minutes. Assemble the potatoes in a squeezer and place a lemon slice between them. Preheat oven at 200-degree centigrade and after preheating it, place the baking tray in it.

Bake the potatoes at 200-degree centigrade for 15 minutes. The potatoes have baked after 15 minutes and it is ready to be served. Serve it along with coriander or a mint dip.