Besan ladoo with Tips and Tricks 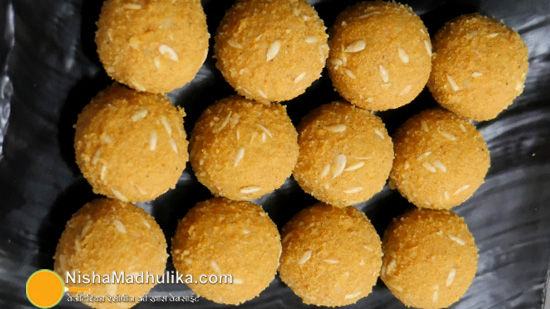 This time make Besan Ladoo along with its tips and tricks. These Ladoos are tastier than the Ladoos available in the market.

How to make Besan Ladoo

Add 1 tbsp of ghee while continuously stirring it to avoid clods and keep it aside to cool down.

Add 175 gms of ghee in the wok and melt it. Add 250 gms of chickpea flour in melted ghee on the low-medium flame and roast while continuously stirring it.

Add more 1 tsp of ghee if the mixture appears dry. Sprinkle some water to make the mixture granular and roast it until water disappears.

Switch off the flame but, don’t stop stirring for 1-2 minutes. Pour the mixture in another bowl to slightly cool it quickly.

Dry roast ¼ cup of Muskmelon seeds until they expand and their colour changes.  Pour them in a separate bowl to avoid them from over roasting and stir the mixture in intervals.

Take some mixture in your hands and bind it while rolling in your palms. Bind them and give them the shape of a ball. Prepare all the Ladoos in the same way.

16 Ladoos would be made out of the prepared mixture and you can store them in an airtight container for 10-11 months.

When the Besan Ladoos are not granular

The thicker sized chickpea flour is required to make these Ladoo granular.

There are two types of Tagar

Boora is consist of the fine particles

Crispy Tagar is consist of the thicker sized particles

If you want to make granular Ladoo then, you will take 1/2 quantity of Tagar and 1/2 quantity of crispy Boora and If you are using homemade Tagar then, there is no requirement of differentiating it into the types. The tagar which is homemade is sufficiently thicker sized.

Lumps are formed in the mixture

Roast while continuously stirring the mixture to avoid the formation of lumps. Even if lumps appear then, all you have to do is that press and stir the chickpea flour while roasting to break them.

Chickpea flout sticks to the throat while eating

No matter how long we roast, the chickpea flour stays raw

Roast chickpea flour on the low flame to avoid such issue. If you would roast it on the high flame then, it would be partially roasted which becomes the reason for its raw taste.

Pour it in a separate vessel to cool down after stirring it for 1-2 minutes.

Why does the roasted chickpea flour lose its thicker consistency?

If you will add Tagar in the warm mixture then, it starts melting which loosen ups the mixture and creates problem while binding the Ladoos. Slightly cool down the chickpea flour and do not decrease its temperature too much.