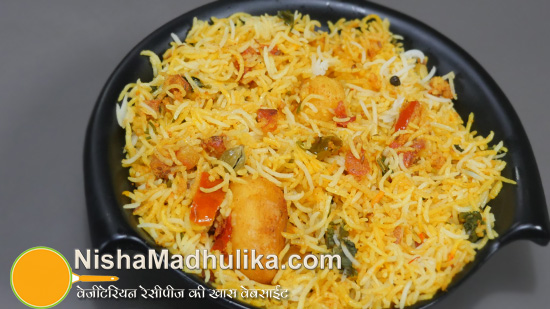 Aloo dum biryani is a recipe which is appreciated in many places. Its flavour and aroma is enough to attract anyone.

Ingredients for the dum aloo biryani

How to make the Aloo Dum Biryani

Wash and soak 1 cup of the basmati rice for ½ an hour in the water and remove the excess water. Preheat the 1 litre water to boil and add the rice in the boiled water. Add the 2 cinnamon stick, 2 crushed green cardamoms, 1 tsp of the salt, 1 tsp of ghee and mix them properly.

Cover and cook the rice slightly less on the medium flame. Cook the almost 10-15% less.

Check the rice and switch off the flame if they are partially cooked. It takes 5 minutes to prepare the boiled rice. Filter the rice out of the water using the strainer to avoid the extra water.

To prepare the aloo masala

Add the saffron strands in the milk so that they leave their colour in the milk. 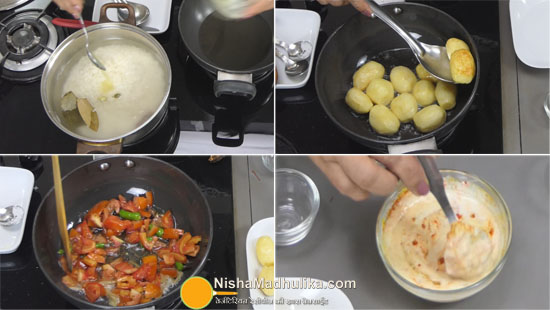 Add and roast the ½ tsp of the cumin seeds, seeds of the 1 black cardamom, 4 cloves and 6 to 7 black peppers in the ghee. Now, add and roast the 2 chopped green chillies and 1 inch piece of the grated ginger. Cook and add the finely chopped tomatoes on the low flame for 1-2 minutes.

Switch the flame when the tomatoes are roasted and keep it aside to cool down.

Stir and cook the mixture until the ghee separates from the mixture. The ghee is separating from the mixture and add the potatoes, ¾ tsp of salt, chopped green coriander and mint leaves in it. Stir and roast the masala for 1-2 minutes.

Add the 1/ 2 cup of water in and cook it until it boils. Switch off the flame and keep aside the wok once the potatoes boils. 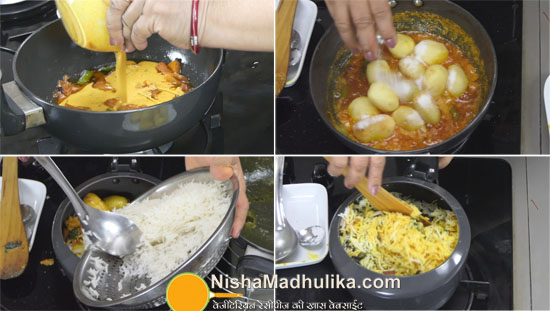 Switch off the flame after the 15 minutes and open the lid to check the biryani after 10 minutes.

The dum aloo biryani is ready to serve. Take it out in a bowl and serve it with curd, raita or any dip.

You can use the cooking oil instead of the ghee.

Do not add curd in the hot masala otherwise, it will curdle.

The saffron strand is an optional ingredient.

Do not cook the biryani on the high flame otherwise it will burn from the bottom.