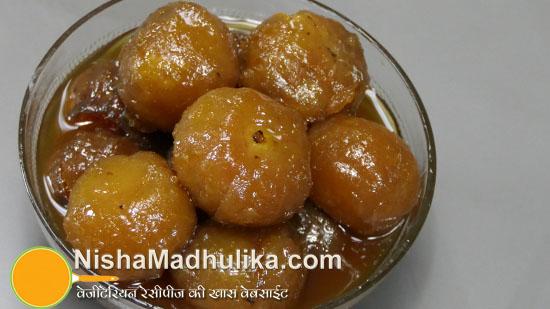 Ingredients for Amla Murabba with jaggery

How to make Amla Murabba with jaggery

To steam the gooseberries
Take 2 cup water in a vessel, to boil. Cover the water so that it boils quickly. As water boils place colander over it. Keep gooseberries in it. Cover and cook it for 8 minutes, keep flame medium. After getting steamed, gooseberries have turned soft. Then turn off flame. Keep the gooseberries in a plate, to cool it quickly. As the gooseberries cool down, poke them with fork, very close to each other. Poke all likewise, keep in an air tight container. Take jaggery put it over the gooseberries, close the lid, keep it in sunlight or in room till jaggery melts and turns into syrup for upto 2 days.

For jaggery syrup
After 2 days, jaggery has melt, to make it dense, put gooseberries to cook in the wok, turn on flame. Cook the jaggery syrup until dense for 5 minutes, check it by pouring few drops,

Pour a few drops from the ladle and check if it is sticky.If it drops slowly it is sticky enough. Turn off flame, murabba is ready, let it cool. As the murabba cools down. Add 1 lemon's juice to it, stir well. Murabba is ready keep it in a bowl.

Gur amla Murabba is ready to be relished. It is very beneficial for health.