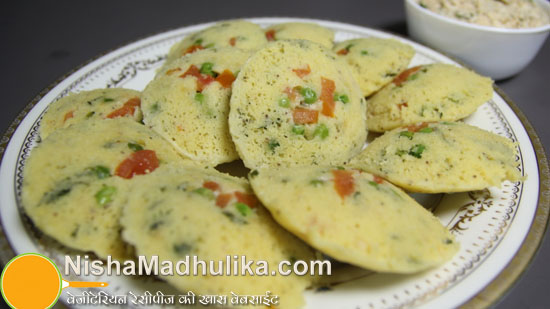 South India's recipe of idli is prepared with simple rice and dal batter. Today we are making idli with a twist of chickpea flour, semolina and veggies. You will definitely like eating these besan sooji idlis.

How to make Besan Sooji Idli

Take chickpea flour, semolina and curd in a big mixing bowl and mix well. Now add water in small portions and prepare a thick batter. Prepare a batter same like that of dal-rice batter idli. Add green chilly and ginger paste to it as well and mix well.

Heat some oil in a wok and splutter mustard seeds in it. Now add urad dal and saute for a while and then add curry leaves. Turn off the flame and mix this tempering to the batter. 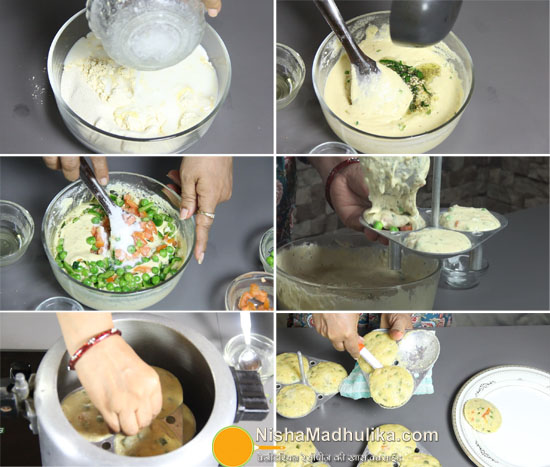 Mix chopped tomatoes, green peas, finely chopped capsicum and salt. Mix everything really. Almost 1/4 cup of water is used for making this much quantity of batter. Keep the batter aside for 10 minutes.

Boil 2 cups of water in a pressure cooker. Meanwhile when the water starts boiling, prepare the idli stand. Grease each mold on the tray and place 2 to 3 chunks of tomatoes and peas over it.

Now the batter is ready as well. Mix some eno fruit salt to the batter and evenly pour batter into each mold. Fix all the molds over the stand and place it inside the pressure cooker. Close the lid of pressure cooker and remove the whistle.

Let the idli cook for 10 to 12 minutes and then turn off flame. Idli is ready, open the lid of pressure cooker and take out the idli stand. Allow them to cool down. With help of the knife separate the idlis from mold and place them over a plate.