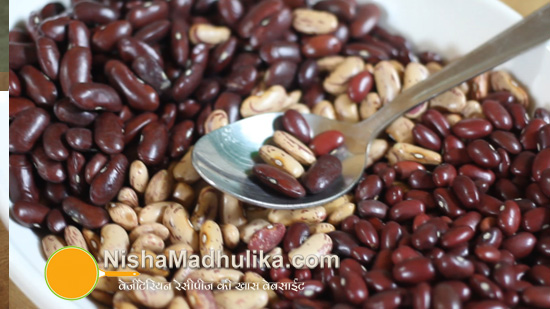 Rajma are popularly known as kidney beans. This unique bean is shaped like a kidney and has a strong flavor with powdery texture. It is dried kidney having reddish brown color. Rajma are known for their strong nutty flavor and musky aroma. Some of the best rajma are said to be grown in grown in Jammu. Rajma is extremely popular and special preparation of Punjabi cuisine, it goes well with rice or what is popularly known as rajma chawal. Rajma beans are fully loaded with amino acids and proteins, in addition to these; it consists of carbohydrates, dietary fiber both soluble and insoluble, fatty acids, and minerals like magnesium, molybdenum, potassium, sodium, copper, iron, phosphorous, and Vitamins such as Vitamin B complex constituents, Vitamin K and other traces of essential vitamins, antioxidants, and minerals.

In Indian market there are three types of rajma:

They are dark red in color and are highly flavored. These beans hold their shape really well during cooking and absorb flavors easily, they are the favorite beans used for simmered dishes. They are available in small as well as big sizes.

It is grown in the foothills of Himalayas. They are known as Chitra or picturesque because of the intricate shading/design on these beans. These beans are very famous and special in Kashmiri cuisine. They better then the regular rajma and very soft texture and more subtle taste. These are white in color.

They are as famous as Kashmiri mirch is. These small red kidney beans are delicious and cook fast. These beans are famous all over Himalayas and it’s foothills for their aroma and subtle taste. Kashmiri rajma come out best when soaked for about 4-5 hours prior to cooking.

How to store Rajma