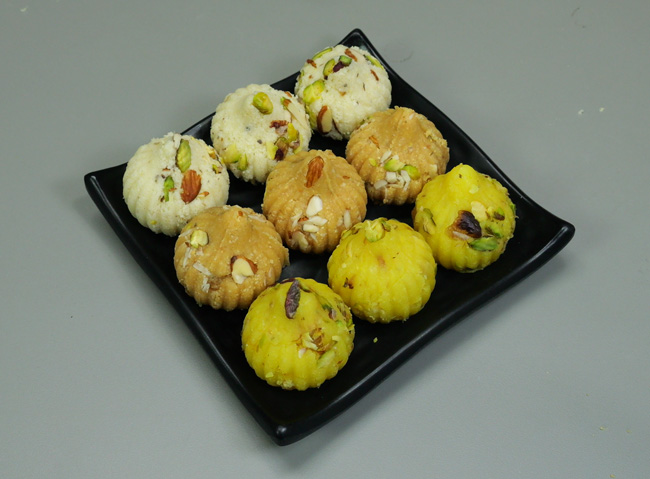 On the arrival of Ganesh ji, today we are going to make his favourite sweet, Modak.  Today we will make Modak in 3 ways.  And all these three types of modaks will be made very easily.  Their taste will be very wonderful and you can make them in large quantities and store them in the fridge.  So you also make 3 types of modaks with this easy method and enjoy the taste of them by offering Ganesh ji with your family.

Mix them and roast for 1-2 minutes.  Then add 2 tbsp of coconut powder and roast it for 1 minute.  Turn off the flame and stir the mixture in a hot pan and take it out in a bowl.  Put 1/2 litre of full cream milk in the same pan and thicken it on high flame till it reduces to half.

Also, add 2 tbsp of chopped raisins and 6 coarsely ground cardamom and mix it well.  When the mixture mixes well, turn off the flame and take it out in a bowl and let it cool.  When it becomes cool to touch, grease the mould for making modak with ghee.

After closing the mould, lift a little mixture, bind it and put it in the mould and fill it by pressing it.  Then press the mould well and open it, take out the modak and keep it in a plate.  Similarly prepare all the modaks.  Rice flour milk modak will be ready.  Serve them and enjoy their taste.

Grind 250 grams of paneer in a mixer jar and take it out in a bowl.  Now add 1 cup of sugar powder and mix it well.  After mixing it, put it in the pan and roast it on low-medium flame while stirring continuously till it becomes thick.

When the paneer thickens, add 1/2 cup of coconut powder and 1/4 cup of cashew powder and roast it for 2-3 minutes, mixing it well.  Then put 1 tbsp of almond flakes in it and fry for 2 minutes.  Turn off the flame, add 4 coarsely ground cardamom, mix it well and take it out in a bowl and let it cool.

When the mixture cools down a little, close the mould for making modak and put the mixture in it by binding it.  Open the mould by pressing it well and keep the modak in a plate.  Similarly make the rest of the modaks as well.  Paneer Modak will be ready.  Serve them and enjoy their taste.

Put 1 cup of roasted peeled peanuts in the mixer jar and grind it on pulse mode, that is, run the mixer a little, then stop then run it back.  Then take out the peanut powder in a bowl.  Now put 10-15 almonds in the pan and dry roast it for 4-5 minutes on medium flame.  Then take them out.

In the same pan, add 1/2 cup of coconut powder and roast it on low flame while stirring continuously.  After roasting, take it out in a bowl of peanut powder.  In the same bowl add 1/2 cup of condensed milk, 5 tbsp of sugar powder, 2 tbsp of raisins and 6 cardamoms coarsely crushed.  Mix them well.

Apply a little ghee on your hands and mix the mixture well.  When mixed, pour a little mixture in the mould while binding it.  Then press it and put 1 roasted almond in the middle and put the mixture and close it.  By pressing it evenly, open the mould and take out the modak and keep it in a plate.

Similarly prepare the rest of the modaks as well.  Peanut Modak will be ready.  Serve them and enjoy their taste.

Rice flour modaks can be kept in the refrigerator and eaten for 15 days.

You can keep the cheese modaks in the fridge and eat them for 10-12 days.

Peanut Modaks can be kept outside for 15 days and kept in the refrigerator for more than 2 months.