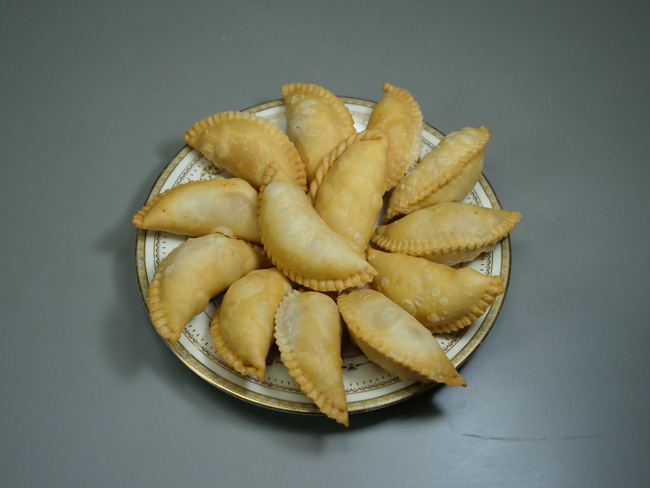 Today we are going to make Besan Mawa Gujiya specially for Holi.  Gujiya with this special stuffing is very tasty, whoever eats it will not be able to stop himself from praising it.  The method of making it is very easy and you will prepare it in a jiffy.  So on this Holi, you also make Gujiya with special stuffing of gram flour and mawa and serve it to your guests and family members.

In a bowl, add 2 cups of all purpose flour and ¼ cup of ghee and mix it well.  Now add water little by little and knead a hard dough.  After kneading, cover it and keep it for half an hour.

Process of making the Stuffing

Put 2 tbsp of ghee and ½ cup of gram flour in the pan and fry it on low-medium flame while stirring continuously.  Turn off the flame after the gram flour changes its colour and when it smells good.  Stir the gram flour in a hot pan for some time, then take it out in a bowl.

In the same pan, break ¾ cup of mawa and fry it on low-medium flame while stirring continuously.  When the colour of mawa changes and it smells good, take it out in a bowl along with gram flour.  Now mix them well and when it cools down, add 2 tbsp of grated dry coconut, 2 tbsp of chopped raisins, 2 tbsp of almond flakes, 2 tbsp of chiroli and 6 cardamom coarsely crushed.

After mixing them, add 1 cup of boora to it and mix it well.  In this way the stuffing will be ready, cover it and keep it.

Process of assembling the Gujiya

Mash the dough lightly and break it into small balls.  Then take a ball and make it round like a peda and roll it thin.  Then put this poori in the gujiya mould and put some stuffing in the middle and apply some water on the edges of the poori.  Then close the moulder and press it well from all sides and remove the extra dough by breaking it.

To make gujiya with hands, roll the puri and keep it on hand.  Put some stuffing in the middle and apply water with your finger in the corners and close it by giving the shape of gujiya.  After sticking the edges, bend it from one corner with the thumb finger of one hand and press it with the thumb finger of the other hand.  Similarly fold all the corners and press.  Fill the rest of the gujiyas in the same way and keep them covered in a tray.

Process of frying the Gujiya

Heat the ghee, it should be less than medium hot and the flame should be low-medium.  Put some gujiyas in hot ghee and let them fry for 4-5 minutes.  After 4 minutes, turn them and fry them till they turn golden brown.

Take them out after frying and let the ghee cool down a bit before frying the gujiyas a second time.  Because the ghee gets hot very fast, the gujiyas will not be able to fry completely.  Similarly fry the rest of the gujiyas as well.  Crispy gram flour gujiyas are ready, serve them and enjoy their taste.

The dough has to be kneaded a little hard.

The poori has to be rolled evenly and thinly.

While filling the gujiyas, water must be applied around the corners before closing it.

If any gujiya breaks or remains open while filling, then keep it aside.  After frying all the gujiyas, fry them in the end.

While frying gujiyas, the ghee should be less than medium hot and the flame should be low-medium.