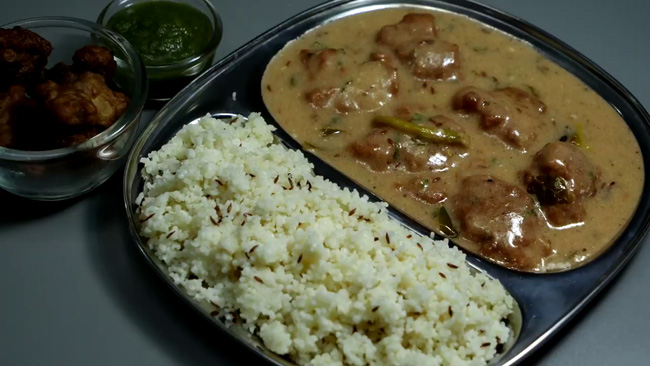 If you do not like to eat fried roasted food during fasting, then today's recipe is specially for you.  Today we are going to make fasting pakora kadhi and rice.  They are very easy to make and they are ready in a jiffy with very few ingredients.  So to give this different taste to your fasting food, you also make fasting pakora kadhi and rice with this easy method and enjoy its taste.

Process of making Batter for Pakoras

Mix them well, add 1 tbsp of water and mix it well.  In this way the batter will be ready.

Process of making solution for Kadhi

Process of frying the Pakoras

Heat oil in the pan, the oil should be medium-high hot and the flame should be medium.  Put the batter little by little with the help of a spoon in the hot oil and let it fry for 1-2 minutes.  Then fry them by turning them till they become golden brown.  After frying, take them out and fry the rest in the same way.  In this way the pakoras will be ready after frying.

Put 1 tsp of ghee in the cooker and heat it.  Put ½ tsp of cumin seeds in hot ghee and fry.  After roasting, add the sama rice (washed thoroughly) and fry it lightly.  Then add 1 cup of water and ¼ tsp of rock salt and mix it well.

Close the cooker and cook them on high flame till 1 whistle comes.  Turn off the flame when it whistles and let the pressure of the cooker release.  Take out the rice when the pressure is released, in this way the rice will be ready.

Put 1 tbsp of oil in a pan and heat it.  Put ½ tsp of cumin in hot oil and fry it lightly.  Then reduce the flame to low and put 2 whole green chilies in it, add 2 finely chopped green chilies, ½ tsp of grated ginger and 5-6 curry leaves.

After frying them lightly, stir the solution once and put it in the pan while mixing.  Cook it on high flame while stirring continuously till the kadhi comes to a boil.  When it comes to boil, reduce the flame to low, so that the boil remains, add ½ tsp of rock salt and ¼ tsp of crushed black pepper.  Mix it well and let it cook for 10-12 minutes.

After cooking for 7-8 minutes, put some pakoras in it and cook it for 5-6 minutes by stirring it well.  When the time is up, the kadhi will be ready.  Put some green coriander in it and take it out.  Serve the Falahari Kadhi Rice and enjoy the taste.

The batter of pakoras has to be kept a little thick.

After frying the kadhi, it has to be stirred continuously till it comes to a boil.