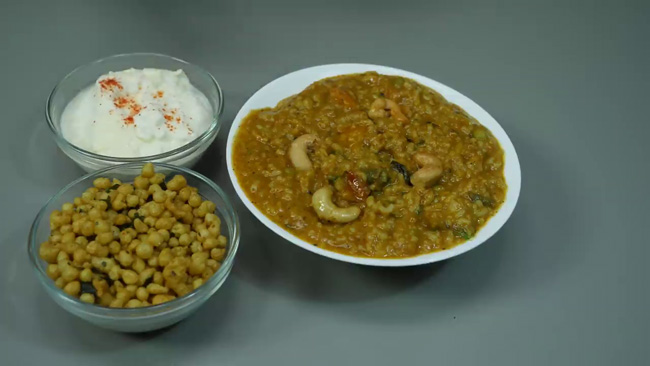 Karnataka Special, today we will make Bisi Bele Bhat.  It is very easy to make and it is ready in a jiffy.  Along with Karnataka, it is made in many parts of South.  If you make it once and eat it, then you will like to eat it again and again.  You will be able to know its taste only after eating it.  So you too make Bisi Bele Bhaat with this easy recipe and enjoy this special taste of Karnataka with your family.

Mix them well and close the cooker and cook on high flame till 1 whistle comes.  After a whistle, reduce the flame to low and cook them for 2 minutes.  When the time is up, turn off the flame and let the pressure of the cooker release.

Put 1 tbsp of chana dal and 1 tbsp of urad dal in the pan and fry it on low-medium flame till golden brown while stirring continuously.  After roasting, take them out on a plate.

Fry them lightly while stirring continuously, also add ¼ tsp of turmeric and fry them.  When the spices get a good colour and smell good, turn off the flame and take them out along with the lentils.  After cooling the spices, put them in a mixer jar and grind them coarsely.  In this way Bisibele Bhath Masala will be ready.

Process of making the Tadka Masala

Put 2 tbsp of ghee in a pan and heat it.  Fry 6-7 cashews cut into 2 pieces in hot ghee and add 6-7 whole cashews till they turn light brown.  When roasted, take them out and put ½ tsp of mustard seeds in ghee and let them crackle.

When it crackles, put 10-12 curry leaves in it and stir it a little.  Then add ¼ tsp of turmeric, 1 tomato (chopped after removing the seeds) and ½ cup of chopped capsicum in it.  Cook them lightly, when cooked, add 1 tbsp of tamarind pulp, ½ cup of water, bisibele bhath masala and roasted chopped cashews and mix it well.  Cover it and cook for 2 minutes, the tadka masala will be ready.

When the tadka masala is ready, add boiled lentil rice, vegetable and ½ tsp of salt and mix it well.  If it becomes too thick, add ½ cup of water and mix them.  Then add a little green coriander and 1 tbsp of ghee to it, mix it well and cover it and cook for 2 minutes on low flame.

When the time is up, Bisibele Bhath will be ready.  Serve it garnished with roasted whole cashew nuts and some green coriander and enjoy its tangy taste.

Take out all the spices carefully.

The spices are to be roasted on low flame till they change colour and aroma comes.