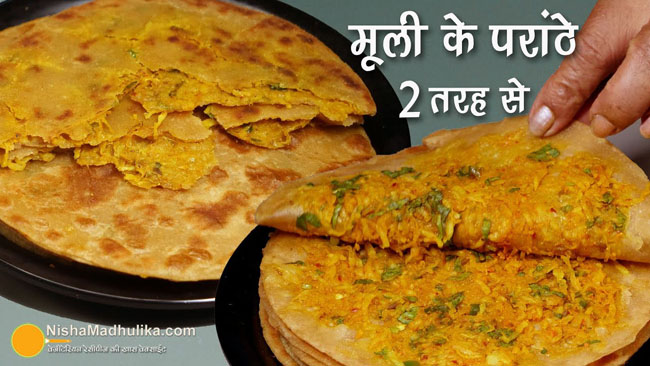 Eating radish parathas in the cold season is fun in itself.  Enjoying this taste, today we will make Radish Parathas.  We will prepare these parathas in two ways and both will be absolutely wonderful in taste.

In a bowl add 2 cups (300 grams) of wheat flour, 1 tsp of oil and ½ tsp of salt and mix it.  Now add water little by little and knead the dough, like kneading for parathas.  Knead it, cover it and keep it for 20 minutes.

In a bowl, grate 3 radishes (500 grams) with a fine grater.  Then put a cloth on the second bowl and squeeze all the water by placing the grated radish on it.  After squeezing, take out this radish in a bowl.  Now add 2 finely chopped green chilies after removing the seeds, 1 inch of ginger grated, ¼ tsp of cumin seeds (crush and put it in), ¼ tsp of carom seeds (crush and put it in), ½ tsp of turmeric, 1 tsp of coriander powder, ½ tsp of red chilli, ½ tsp of dry mango powder, ½ cup of finely chopped radish leaves and 3-4 tbsp of green coriander.  Mix them well, the stuffing for radish paratha will be ready.

Take some oil in your hand and mash the dough lightly.  Then add ¾ tsp of salt or as per taste in the stuffing and mix it.  Now break a little dough from the dough, break as much dough as you want to make paratha, round it and make a peda.  Now apply some dry flour on this dough and roll it a little small and thick.  Then close it by keeping a little stuffing inside it.  Then press it and increase it a little so that the stuffing inside it spreads evenly.

Now wrap it back in dry flour and increase it a little by hand, it does not break the paratha.  Roll it out lightly, if it starts sticking in the middle, then roll it with a light dough.  After rolling it, if there is flour on the paratha, then dust it.  Then heat the tawa and apply some oil on it and put the paratha on the tawa and cook it with little oil till brown spots appear from both the sides.  When roasted, take it off and make the rest in the same way, Radish Parathas will be ready.

Break a ball and cut it into two equal pieces.  Now make a peda by making these two rounds.  Roll a peda thin like a roti and keep it on a plate.  Roll the other one in the same way and spread some stuffing on it and spread it thinly.  Now put the first roti on top of it and stick it by pressing it well.  Roll it a little at a time, not too much, just roll it lightly.  Now do it in the same way and take it off and roast the rest in the same way.  Radish parathas will be ready.

Serve them with mango pickle and curd and enjoy their taste.

The flame will remain medium while roasting the parathas.  If it seems that the paratha is cooking very slowly, then after stirring it for a while, turn it back to medium.