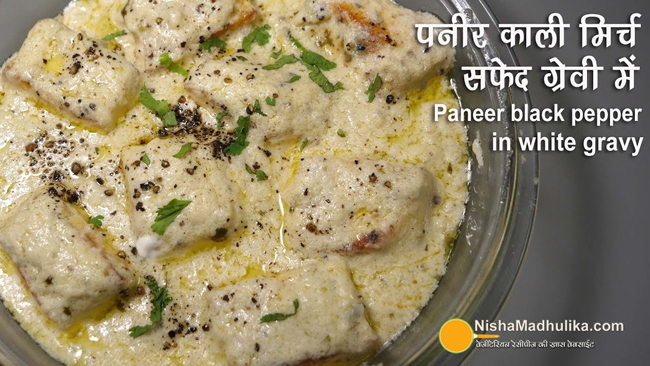 Black Pepper Paneer Sabzi in White Gravy, this is a different recipe and the taste of this vegetable is also amazing.  If you want to eat something special in paneer, then definitely make it because you will like its different taste.  In this, there will be soft paneer in very few spices with white gravy, which will be very tasty to eat.

Take 200 grams of paneer and cut it into medium size boxes.  Now to marinate them, in a bowl take 2 tbsp of curd, 2 tbsp of fresh cream, 1 tsp of cornflour, 1 tsp of dry fenugreek (crush the palm and remove the stalk), 1 tsp of finely chopped coriander stems ¼ tsp of coarsely ground black pepper and 2 coarsely crushed small cardamom and mix well.

Now add ¼ tsp of salt to it and mix it well.  Put the pieces of paneer in this bowl and coat it well in the mixture.  After coating the paneer well, keep it for 20 minutes.

Now put 2 tbsp of oil and 1 tbsp of butter in the pan and heat it.  When it becomes slightly hot, add ¼ tsp of coarsely ground black pepper and 2 coarsely crushed cardamom and fry it lightly.  Then add the paste of cashews and seeds to it, after adding a little water in the jar, take out the remaining paste.  Also, add the remaining marinade and fry it till the oil separates, mixing it well.

After the oil separates from the spices, reduce the flame to low and reduce the temperature of the spices a little and add ½ cup of whipped curd to it.  Remember, while stirring the spices, add curd and keep stirring it till it comes to a boil.  After boiling, add fresh cream, a little more than ½ tsp of salt, 1 tsp of sugar and if the gravy seems a little too thick, then add little water and stir it.

When the gravy is ready, add roasted paneer to it, cover and cook it for 2 minutes.  When the time is up, black pepper in white gravy will be ready as a curry.  Serve it garnished with some crushed black pepper and coriander leaves and enjoy the taste.

The flame will remain low-medium while cooking the paneer and the paneer should not be darkened too much.

Beat the curd well and slow down the flame while putting it in the pan.