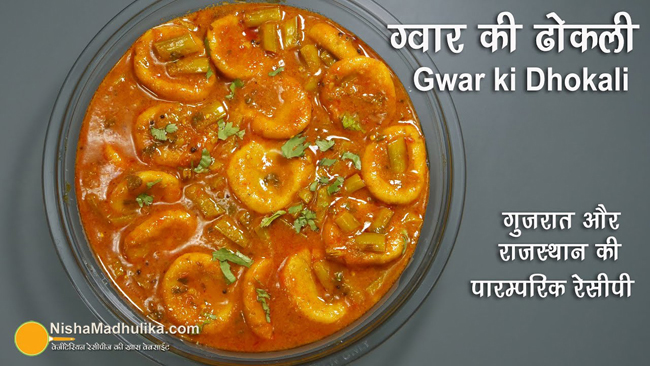 Making a traditional recipe has its own fun, because along with the taste, many such recipes are also known which are made for those vegetables but are also useful in many other recipes as well.  Keeping this in mind, today we are going to make Gawar Fali Dhokli, a traditional dish of Gujarat and Rajasthan.  It is so delicious to eat that once you make it, you will like to make it again and again.

Process of making dough for Dhokli

To make dough, first take ½ cup of wheat flour, ½ cup of gram flour, ⅓ tsp of salt, ¼ tsp of carom seeds (crush it lightly in the palm), ¼ tsp of cumin, ¼ tsp of turmeric powder, ¼ tsp of red chili powder, ¼ tsp of baking powder and 1.5 tbsp oil.  Mix them well and add water little by little and knead the dough a little less than hard.  After kneading, cover it and keep it to set.

Wash and dry 200 grams of cluster beans and cut the tips from both the sides.  After cutting them all in this way, cut them into your desired size.  Now put 3 tbsp of mustard oil in a pan and heat it.  When hot, put ¼ tsp of black mustard seeds in it and let them crackle.  Remember the flame will be low.

When it crackles, add 1 tsp of cumin seeds, 1 pinch of asafoetida, 1 tsp of coriander powder and ½ tsp of turmeric powder.  Then add 2 tomatoes, 1 inch of ginger and 2 green chili paste in it and mix the spices well and turn the flame medium.  Then add 1 tsp of kashmiri red chili and fry it well while stirring it for a while till oil separates from the masala.

When the oil separates from the spices, add cluster beans and fry it with spices for 2 minutes.  After frying well for 2 minutes, add 3.5 cups of water and 1 tsp of salt, stir it well and let it cook till it comes to a boil, and keep stirring it for a while.

Make dhokli till the vegetable boils, for this mash the kneaded dough well.  Now take two pieces of this dough and make a round by mashing it.  Keep it on a board or a chuckle and increase it in length.  Make a long roll of about 1 inch in thickness and cut it into small pieces with a width of about ¼ cm.

Now lift a piece by pressing it lightly and keeping the thumb in the middle, press it, give it a shape of a bowl that will be thick from the side and thin in the middle.  Make all dhoklis in the same way.  Similarly make dhokli from the other part of the dough as well.

When the gravy boils, put dhokli in it one by one, remember not to put all the dhokli together, otherwise the curry will stop boiling and the dhokli will dissolve in it. After adding all the dhoklis, let it cook for 2-3 minutes.  After 3 minutes, turn the flame to medium and let it cook for 15 minutes while stirring it once in a while.

Check it after the time is up, if you want to thicken it a little more, then cook it for 2 more minutes.  Now put ¼ tsp of garam masala and 1 tbsp of green coriander in it, mix it well and turn off the flame.  Then add juice of ½ lemon and mix it well.  Gawar Phali Dhokli will be ready.  Serve it with roti, naan or rice and enjoy the taste.

While making dhokli dough, the dough should not be too thin nor too thick.

While putting Dhokli in the gravy, it has to be put one by one so that the boiling of the curry does not stop.

Let the gravy cook on medium flame for 15-17 minutes while stirring it once in a while.