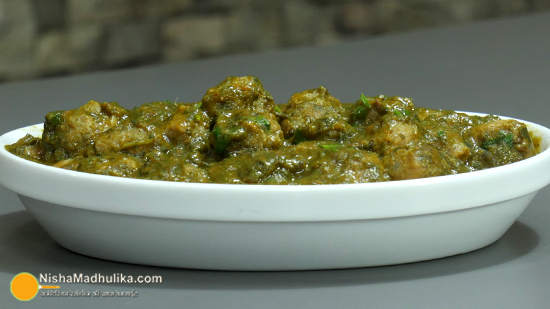 The soya chunks spinach curry is a perfect and nutritious curry.

Take a vessel and preheat 2 cups of water in it. After the water has boiled, switch off the flame, add a cup of Soybean and a teaspoon of salt to it.  Cover the vessel and keep it aside for a while so that soybean can expand.

Take 250 grams of spinach, clean it, remove its stalk and wash it with the water. After washing it, keep it in a strainer for draining out the extra water from it.  After draining out its water, chop it finely and roughly.

Take a pan, add the chopped spinach in it followed by a ½ cup of water. Cover and boil it for 5 minutes. After 5 minutes, stir it softly and switch off the flame after a while. Add the cooked spinach in a grinder jar and grind it coarsely ground, not finely.

Take another pan and add 2 tablespoons of oil in it. After heating the oil, add a ½ teaspoon of cumin seeds to it and roast for a while. Add a teaspoon of coriander and a paste of 3 tomatoes, an inch of ginger baton along with 3 green chillies to it. 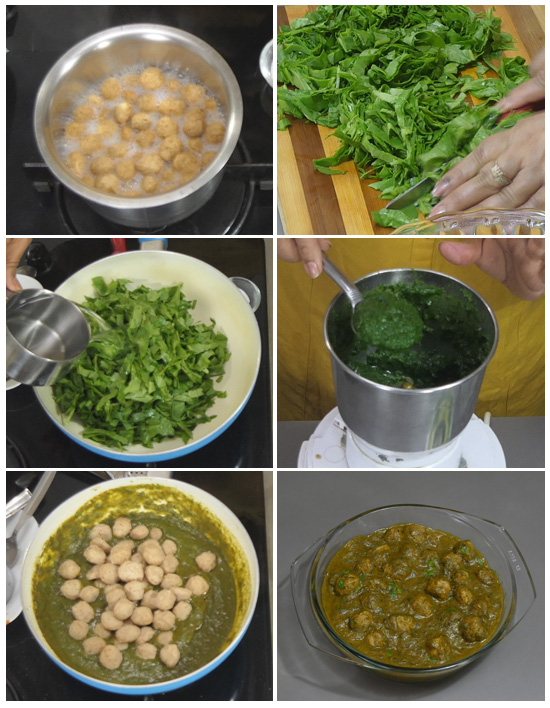 Add the ground spinach puree to the Masala mixture and cook while stirring it. Add a ¼ cup of water, a ¾ teaspoon of salt, a ¼ teaspoon of Garam Masala to it and stir for mixing it well. Cook while covering it on the low flame for 5 minutes and stir it softly after the 5 minutes.

The curry was cooked after 5 minutes, switch off the flame. Squeeze a ½ lemon juice to it and mix well. After adding the lemon juice, add a tablespoon of green coriander and some finely chopped green coriander to it. The Palak Nutri curry is ready to be served.

You can serve it with Chapati, Paratha, Naan, rice or anything according to your taste and the cooked amount of curry is enough for 4 to 5 members of a family.

You can use the remaining water which we used for boiling the spinach in the curry.

You can increase the quantity of red chilli powder according to your taste.

You can add a ½ cup of chopped green fenugreek instead of dry fenugreek leaves.

You can use wheat flour instead of chickpea flour.

You can skip green coriander according to your taste.