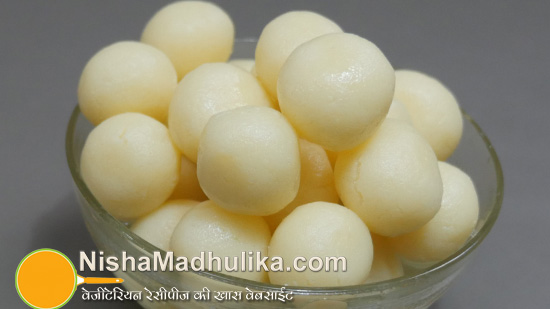 Bengali chenna rasgulla is a rasgulla which can fill your mouth with amazing flavours during the festivals.

Ingredients for the chenna rasgulla

How to make Bengali Chenna Rasgulla

Boil the milk in a bowl and remove it from the gas once it boils to cool down.

Extract the lemon juice and add equal amount of water in it.

Once, the milk cool down add the lemon juice in it and stir it for a while. While stirring you’ll realise that milk is turning into curdle milk. The chenna and whey milk will start separating in the vessel, once they separate properly you can stop the stirring process. Take a strainer after the 2 minutes and strain the chenna out of the whey milk. Strain the chenna on the cotton cloth and add cold water over it to remove the flavour of lemon from the chenna.

Pick the cloth using both the hands and squeeze out the remaining water from it. Chenna is ready to prepare the rasgulla.

Take the chenna in a plate and mash it to make it smooth. During the process of mashing add the refined flour in the chenna and again mash it for 3-4 minutes. Prepare an extremely smooth dough and make the smaller sized round balls of it by dividing it into small portions. Almost 28 round balls are made out of the prepared dough.

For the sugar syrup

The rasgullas will expand after the 5 minutes. Stir the rasgullas using a ladle but, make sure that it does not touches the rasgullas. Cover and cook them again for 17-18 minutes on the high flame.  Check the sugar syrup after every interval of 4-5 minutes. 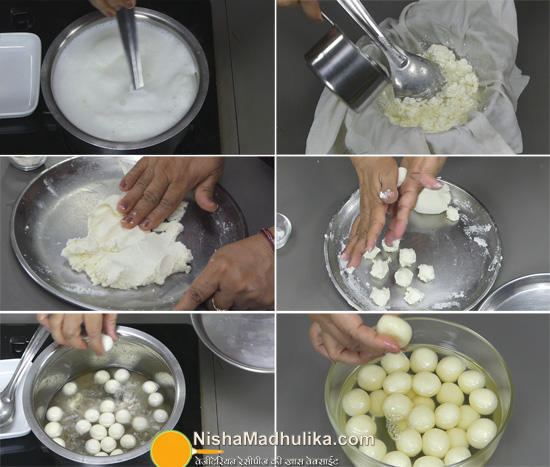 After the 15 minutes when sugar syrup decreases, add the lukewarm water in it and stir it for a while.  Make sure that sugar syrup doesn’t loses its boiling point. Cook the rasgullas after adding 3 tbsp of water for the 3-4 minutes.