The aloo kachori prepared in appam maker is fried in less oil and it is very delicious. They can be served as evening snacks.

How to make Aloo khasta kachori

Take the refined flour in a bowl and add 2 tbsp of oil, ¼ th tsp of salt, carom seeds and baking powder in it. Mix all the ingredients properly.  Add more than ¼ th cup of water to prepare the dough of the refined flour. Cover the dough and keep it aside for 10 minutes to set it.

Pre-heat the 1 tsp of oil in the pan to roast the ginger paste and chopped green chillies in it. Add the peas in the pan, mix it with them well. Coover and cook them on low flame for a while.

Check the peas after 2 minutes once its prepared. Add the mashed and boiled potatoes along with the coriander powder, mango powder, red chilli powder, garam masala and salt less than the ½ tsp.  Mix all the ingredients by continiously stirring them for the 2 minutes. Add and mix the green coriander in it. Switch off the gas once stuffing is ready. Take out the stuffing in a place and let it cool down.

The dough is set and prepared so does the stuffing of the kachori. Make the mini dough loi, lift the dough loi and expand it by giving it a shape of bowl using your hands. Place 2 tbsp of stuffing over the dough and close its edges using your fingers. Flatten it using by pressing it between your palms. Kachoris are stuffed and ready to fry. Prepare all the kachoris exactly same way. 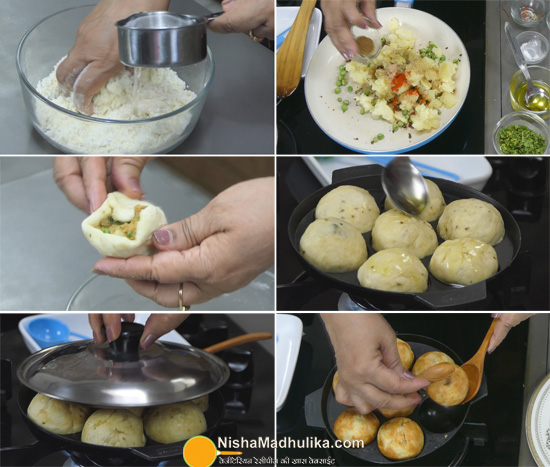 Place the appam maker on the gas and pre-heat it. Add some oil in its each mould. Place the kachoris in the moulds and spread some oil on the top of the kachoris. Cook the kachoris for 3 minutes on the low flame and after that check them.

Flip them after the 3 minutes and cover them after spreading some more oil over them.

Fry them until they are golden brown from all the sides.

Uncover the kachoris and fry them for 2 minutes. It took almost 20 minutes to fry these kachoris.

You can use the ½ inch of grated ginger instead of ginger paste.

You can prepare the kachori with mung dal stuffing also.