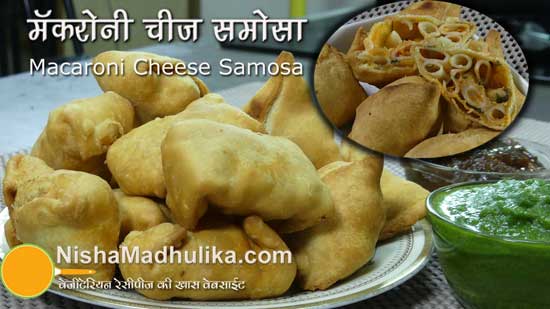 Macaroni and cheese stuffed samosas are relished alot as street food nowadays. You can prepare them as packets and samosas, Kids will love them for sure.

Add ghee and salt in refined flour and mix well. Now knead stiff and tight dough for making the samosa. Cover and keep aside the dough for 20 to 25 minutes to set.

Heat 1 tbsp oil in a pan. When the oil is sufficiently hot, add ginger paste, tomato-green chilly paste, followed by red chilly powder and salt. Now sauté the masala until oil starts separating from it.

Turn off the flame once the masala is ready. Mix boiled macaroni in the masala and mix well. Add some green coriander as well. Transfer the stuffing to a bowl.

After the dough is set, knead it again until smooth. Divide the dough into two equal portions or lumps. 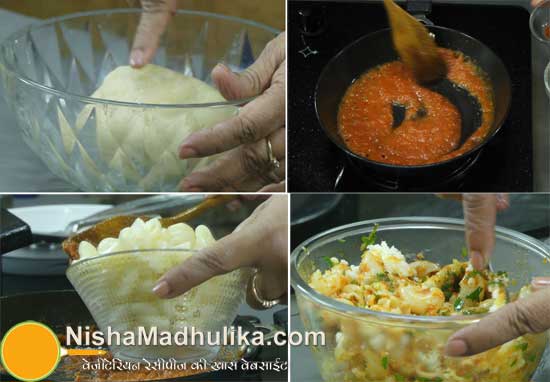 Divide the one dough ball into three equal lumps Take one dough lump and roll giving it a round shape with your hands. Place it on the rolling plate and roll out lengthwise, thinly. Divide the rolled sheet into two equal halves with help of a knife. Lift one part and keep it in your palm. Spread some water on the inner side and fold it in a cone shape (you can see the method for making cone in the video).

Stuff the cone with 2 to 3 tsp filling and give a fold or plate the back of the cone. Stick both the upper corners together with help of water and keep the prepared samosa on the plate. Likewise prepare all the samosas.

Now prepare 8 small lumps from the second dough lump. Lift one dough lump and roll giving it a round shape and roll out into 3 to 4 inch diameter rounds. Keep it thin. Place 2 to 2.5 tsp stuffing over this and fold giving it a shape like a packet. Use water to stick the edges. Packets are ready, place them on the same plate. 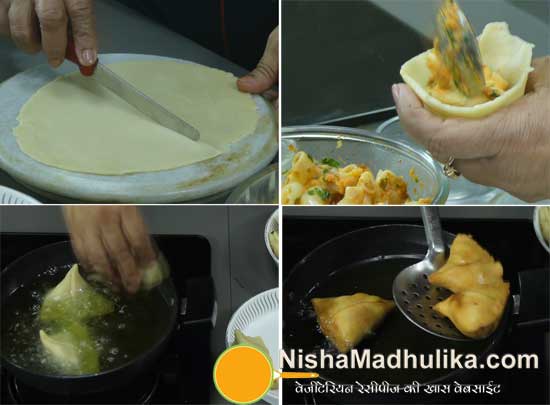 Heat enough oil in a wok for deep frying the samosas and packets. The oil should be medium hot for frying the samosas. Place as many samosas or packets as much as possible in the wok and keep the flame medium. Fry until they get golden brown in color and drain out the fried ones in a plate. Likewise fry all the samosa and packets.

Piping hot and super delicious samosas and packets are ready. Serve with green coriander chutney, sweet chutney or any other sauce as per your desire and relish eating.